Where Does the Term Maverick Come From? 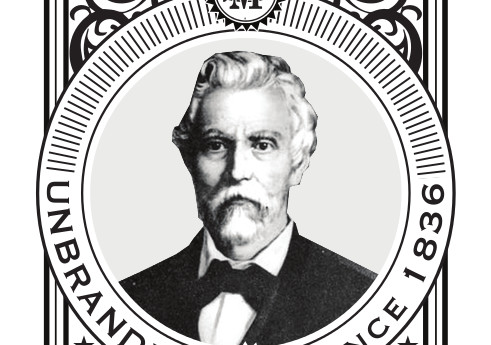 Okay, so you don’t know much about the word “Maverick.” That’s okay. It’s good to be curious about the stuff that you’re drinking (or about to be drinking.) You might know what it means, but odds are you’ve heard it.  A lot.  Your boss may have called you that once. There a pretty solid movie called it.  It’s the name of your favorite whiskey.  But really, where did the word “maverick” come from? Well, you’ve come to the right web page. The makers of Maverick whiskey didn’t pick a name out of a hat and decide to name our precious drink after no sissy word.

As we said, the word “maverick” pops up now and again. Sarah Palin brought the term back into mainstream media in 2008 when she used it over and over during a VP debate with Joe Biden. A YouTuber named his parrot Maverick and launched a lawsuit worth of branding over the name. A good amount of dudes, including Tom Cruise’s character in Top Gun, are named Maverick (by the way, did you know a 2019 sequel is coming?). Business leadership blogs like to use the word to describe the likes of Richard Branson and Steve Jobs, giving you tips on how you to make your personality better by acting like a maverick. The Dallas Mavericks are owned by Mark Cuban (but have nothing on our hometown Spurs. Go Spurs Go!).

But none of this answers your precious question. What exactly is a Maverick? Where did the term “maverick” come from?

Behind pop culture references and personality-type mumbo-jumbo, we know that Sam Maverick (the handsome guy on the bottle of your favorite whiskey) might have something to do with our brand and the word itself. Sam Maverick looks like an old fellow, a stern fellow, a take-no-you-know-what fellow.

He’s all of that.

Here’s the hard fact behind the name-without Samuel A. Maverick, you wouldn’t hear “maverick” on television or read it online. It would be a nonsense word.  Like saying flarblejack or thrytwart.  Nonesense.  And, of course, we wouldn’t have this site to tell you that.

So if you ventured to dare that Samuel A. Maverick was the guy who created the term “maverick,” take a celebratory sip of your drink, Buddy, because you were right.

Who Is Sam Maverick?

Yeah, Samuel A. Maverick is the guy who made “maverick” a thing. (Want to read all about him and his lovely wife Mary? Click here.) Basically, he was a Texas baller in the 1800s. He signed the Texas Declaration of Independence. He was a top lawyer, politician, and land baron who owned over 40,000 acres of Texas soil. He graduated from Yale at the top of his class. He was elected as the mayor of San Antonio and a representative to the Texas State Congress. #comeandtakeit

Sam Maverick was also a bada** who cheated death a few times, beating malaria and surviving a capsized boat. He was days away from being killed like the other rebels holed up in the Alamo during our historic rebellion. In 1842, he was arrested with 60 other “Anglo-Texans” and forced to march to Mexico for over three months. And guess what? That didn’t bother him one bit. Even as he was forced to march without food and sleep in farm animal pens filled with farm animal poop, our favorite Maverick  wrote that he “saw and experienced a thousand new thrills.” It was during this time that he was elected as the mayor of San Antonio. Now that’s a man that takes life by the horns. #livelikesam

The man was meant to make history, and have words made in his namesake.

So that’s Sam but how did his last name come to be a common place noun?  Well, in addition to all of the stuff that Samuel A. Maverick did, there were also something he intentionally hcose not to do – like brand any of his cattle.

How Samuel Maverick’s unbranded cattle lead to the term “maverick.”

That’s right. No branding for Sam. No hot iron rods that show what cattle belong to what rancher (the way it was traditionally done in Texas). Our Maverick wasn’t trying to make a statement or anything…he just didn’t want to be a formal rancher (although he has been recorded as saying he didn’t want to inflict any pain on his cattle…mavericks can be gentlemen, too.) There’s no official records of Maverick owning any cattle, or any animals except for a few horses. But when you have 40,000 acres of Texas land, you’re bound to have a loose cow or two. Sam saw those cows, but he didn’t brand any of them. He didn’t want all of the responsibilities of a proper cattle rancher…he had enough cool stuff to worry about!

At some point, a man owed Samuel a big debt. He offered 400 cattle, and Samuel accepted. But, doing as Samuel A. Maverick did, he didn’t brand those cattle either. He just turned them loose on his big plot of land.

Sam did what Sam did and the cows did what the cows do. They reproduced and made more cows. And the unbranded started to wander off the Maverick land. This caught the attention of nearby farmers and ranchers, but since Samuel A. Maverick was such a hot shot around town, people saw the unbranded cattle and realized “those are mavericks.”

And the name stuck.

The creation of the word “maverick” certainly wasn’t as dramatic as his arrest or political career, but Sam’s loose cattle lead to the creation of the word “maverick.” And we all know that the word doesn’t just apply to unbranded cattle these days. According to the dictionary, a maverick is an “individualist, unconventional person” who is “masterless.” Four years before his death in 1870, that definition was recorded for the first time.

Some other fun facts about Sam Maverick (and Maverick Whiskey.)

The corner of the great Maverick homestead was just a hop, skip, and a jump away from the Alamo. Who owns that space now? Well, we do.  We’ve always kept it in the family.

There’s a Maverick county in Texas as well! Is it as cool as San Antonio? That’s debatable. Is it named after a pretty cool guy? That’s a fact. #livelikesam

Another fun fact about Sam Maverick and etymology: his grandson, Texas politician Maury Maverick, coined the term ‘gobbledygook’ in 1944.

Who are Modern Day “Mavericks” today?

Back in the day, mavericks and maverick cattle had “street smarts.” In 1963, a guy from the San Carlos Indian cattle industry wrote that he preferred maverick cattle because “they are more accustomed to range conditions.” A good maverick knows how to get around without any damn owner.

So maybe you’re a Maverick.

Maverick Whiskey was created in the honor of the original Maverick, Samuel A. Maverick. We #livelikesam by refusing to succumb to conventional ideas or follow where the herd of sheep is going. We #givelikesam by giving a portion of all proceeds to the Alamo Preservation.  We cheat death like Sam….by drinking responsibly. (And let’s not get arrested unless it’s for a noble cause, either.)

So let’s raise a glass to Sam. To doing things our way. To breaking the rules. And to drinking the best damn whiskey seen on this side of the Alamo. Take a visit to the Maverick distillery or just grab a bottle for yourself in honor of the original Maverick.